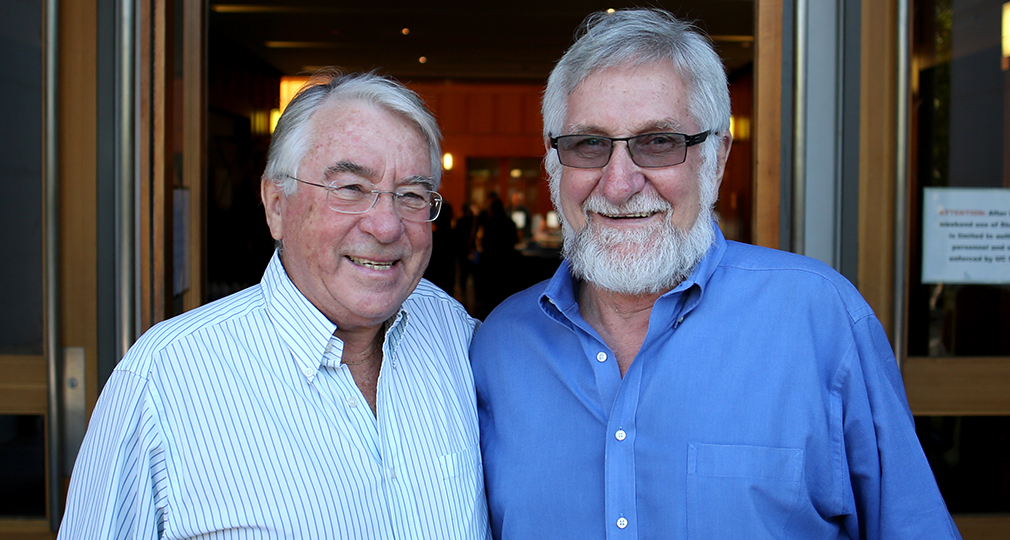 The UC Berkeley School of Optometry has created the Tony Adams Lifetime Achievement Award and the inaugural recipient is Tony Adams. Tony Adams completed his optometric training at the University of Melbourne in 1962. There were five in his graduating class and three of these (Tony Adams, Don Mitchell, and me) have had long academic careers. He then went to Indiana University for his research training before being recruited to join the Berkeley faculty in 1968 at the age of 27. He rapidly became a prominent figure in both the school and the profession.

Within the School of Optometry from 1974-1985 Tony Adams served as the graduate advisor and Assistant Dean for Academic Affairs under Dean Jay Enoch before becoming Dean from 1992-2001. As Dean, his first duties were fundraising and battling with architects, builders, campus officials, and faculty members, as two new floors were being added to Minor Hall to accommodate new biological research
labs and an animal facility.

In response to rapid changes in optometry’s scope of practice, Adams organized the school’s TPA training program, arguably the nation’s best, and he established a Refractive Surgery Center within the School of Optometry clinic. To advance patient-based research, Dean Adams secured funds from Lion’s International to build the Clinical Research Center on the lower floor of Minor Addition. And towards the end of his time as Dean a donation of $1.6 million from the Pamela and Kenneth Fong fund enabled major renovations of the library, the main lecture room and other facilities in Minor Hall.

Tony made numerous important contributions to the optometric profession and I will mention he was a director of the National Board of Examiners in Optometry and chaired its Examination Reconstruction Committee for 3 years when it made its most revolutionary changes.

In 1981, he was appointed to the National Academy of Science’s National Research Council Committee of Vision, and he became chair in 1985. For 11 years, I was the AAO and the AOA representative on the Committee on Vision and my time there overlapped with Tony’s. I witnessed Adams’ creativity and leadership in action as he drove the Committee on Vision through its most highly productive period. One of its reports, Myopia, Progression and Prevalence, provoked interest from the National Eye Institute. Adams’ persistent lobbying led to the NEI funding its first project on refractive error, the Orinda Longitudinal Study of Myopia, with Adams as PI with his graduate students, Karla Zadnik and Don Mutti.

Adams’ innovation and leadership brought many changes to the American Academy of Optometry. He was a driving force on the AAO Committee on Research (1986-1990) when it initiated a program of travel fellowships to enable selected graduate students to attend AAO meetings. This program has since mushroomed. The committee organized summer research workshops, run jointly by the AAO and the AOA to provide research training to young optometric faculty members from American schools of optometry. The first workshop, held on the Berkeley campus, quickly led to an optometric multi-center study of keratoconus (CLEK) funded by the NEI, and many more were to follow.

Adams was elected to the Executive Board of the American Academy of Optometry in 1990, and he became president from 1998-2000. He led a series of reforms related to admissions, committee service, student involvement and international membership. He also served on the editorial board of Optometry and Vision Science (1980-9) and he was appointed Editor-in-Chief (2004-15).

Anthony Adams has had a spectacularly fruitful career. He leaves a long string of impressive, important and enduring accomplishments in the wake of his leadership of the School and the profession.

He is indeed, a most worthy recipient of this Lifetime Achievement Award.