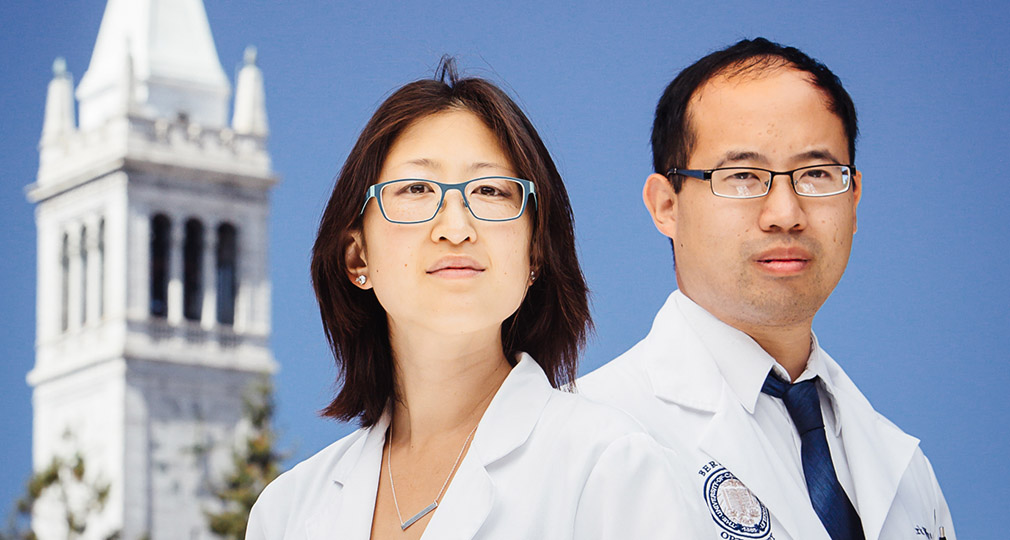 Dr. Debora Lee and Dr. Mark Wu, Co-Chiefs of Berkeley Optometry’s Binocular Vision Clinic, which houses the Neuro-Optometry specialty clinic. Photo by Elena Zhukova.
When Gina Bartiromo began to slide off the edge of Half Dome in Yosemite, her eyesight was the last thing on her mind. Surprised by a June snowfall, Gina and her friends were working their way along the cables on the side of the granite cliff when they came upon a damaged section of the safety rail and she lost her grip. Cartwheeling down the face at thirty miles per hour, Gina was somehow stopped by a tiny lip of rock narrower than a hiking boot; had she traveled any further she would have tumbled a thousand feet to the rocks below.

After a dicey helicopter rescue and several semi-comatose weeks, Gina regained consciousness and learned the extent of her injuries, which included a skull fracture, a brain injury, memory loss, and a spine that was broken in three places. In the midst of these catastrophic injuries, the fact that her vision was impaired seemed almost incidental. The doctors patched her eyes, switching between left and right daily, but without truly understanding that she had developed severe double vision.

Gina slowly relearned how to walk and regained her memory, but her vision problems persisted. Eventually an ophthalmologist told Gina that she’d injured her fourth cranial nerve, that her vision would be permanently doubled, and that the only options were glasses that would partially fix the problem, or surgery with no guarantees. “I was devastated,” Gina recalls. “Here I had a broken back, a broken skull, a brain injury, and memory loss and…and this was the ringer for me.” Gina’s other injuries were expected to heal, but the prospect of permanent visual disturbance was too much to bear.

Gina never contemplated giving up—it’s not in her nature—but the future of her vision appeared grim. Then, in a yoga class, she met Dr. Michael Harris, clinical professor emeritus at the UC Berkeley School of Optometry. Between downward dogs and sun salutations, Bartiromo got to know Harris, who attributes his successful 45 year career in optometry to the fact that he’s “too much of a people person to spend [my] life at a desk or in a lab.” When he discovered Bartiromo’s ongoing struggle, he referred her directly to Berkeley Optometry’s specialized clinic for neuro-optometric rehabilitation. And it was there that Bartiromo’s journey to recovery, which started on a tiny ledge of rock high above Yosemite Valley, took its next giant leap.

“While every course of therapy is unique, successful patients seem to have one thing in common: an appetite for incredibly hard work.”

Berkeley Optometry’s Neuro-Optometry Clinic is an unassuming place. There are no high-tech machines, no sterile surgical suites. Instead there is a short hallway with half a dozen rooms, a constant bustle of doctors, patients, and eager students. There’s something else you wouldn’t expect in a medical setting: the sound of laughter. On a recent afternoon, each of the rooms is occupied by patients, young and old, who appear to be playing games. One room has mazes on a whiteboard, another has blocks on a table, and in a third, a woman plays whack-a-mole, shouting “gotcha” and pressing buttons as bulbs light up in front of her. Clara Moore, an elderly woman who has suffered multiple strokes, leans over a pair of lenses mounted on a stand as she stares at a picture of numbered hot air balloons.

“Which looks closest to you?” asks an optometry student.

“Can you jump from six to five? Six to three? Nice. How does that feel? Straining? Easy?” Mrs. Moore nods her head. “I’m feeling good today.”

A doctor, standing behind her, pats her shoulder and says, “that was a warm-up. We’ll bump you up to the next card. You did way too well.” The doctor, Assistant Clinical Professor Mark Wu, explains the method behind the fun and games. “People who’ve had strokes or TBIs”—traumatic brain injuries—“ might still have perfect vision without any field cuts, even while struggling with convergence insufficiency or reduced visual processing speeds.” (Indeed, 20/20 vision was part of Bartiromo’s “problem” and played a role in her difficulty getting her medical doctors to pay adequate attention to her vision issues.)

“Humans do a lot of things closer than arms’ length,” Dr. Wu continues, describing convergence insufficiency. A brain injury can cause loss of binocular vision, so the eyes refuse to work together and nearby objects become doubled. This is devastating for people in the workforce, making it impossibly fatiguing to read, work on a computer, or manipulate small objects. Strokes or injuries to the brain can also slow the speed with which a person can process the information their eyes receive. “When they’re reading it takes a long time to move across the page,” Wu says, “and even though they meet the DMV standards, they feel uncomfortable driving because they know they might not react quickly when somebody shifts into their lane or a child shoots across the street.” When Mrs. Moore first began therapy, not only had her processing speeds slowed, but her brain had trouble recognizing anything that her eyes picked up on the left side. “We took her to a grocery store where she’d been countless times,” recalls her son, “and she stood inside the doorway and said ‘where am I?’ All the people moving and all the products on the shelves were overpowering and she couldn’t process them.”

The goal of vision therapy—like physical therapy—is to help patients recover as much function as possible. And yet, while every middle-aged jogger has a physical therapist on speed dial, comprehensive vision therapy is incredibly difficult to find, even for stroke and TBI patients. The entire field is still in its infancy, and Berkeley Optometry is one of just a handful of academic centers actively working with patients.

“This is not a standardized field,” says Dr. Debora Lee, one of Dr. Wu’s colleagues. “It’s not like having an ear infection and everybody gets an antibiotic and that’s the end of it.” While there are dozens of exercises available, no two patients have identical problems, and so Berkeley’s clinicians ensure that no two patients get stuck with the same treatment. “Custom tailoring is the key,” says Lee. “This is all based on current clinical work, figuring out what works for each patient. The research literature hasn’t caught up to the strategies we’re using yet, but our patients can’t wait for the publications.”

Some of the exercises are decidedly low-tech, like the cards Gina Bartiromo carries around in a yellow pouch, with pictures of hockey players standing side by side. Her task is to make the images merge, re-training the eye muscles to work together. In another exercise a simple set of beads on a string becomes a powerful tool to help patients learn to bring close objects into focus. On the other end of the spectrum there are apps, computer programs, even research into using Oculus Rift virtual reality technology. Convergence insufficiency results from innervational damage to certain areas in the brain; repeatedly bringing pictures into alignment physically strengthens nearby muscles, helping the patient compensate. But fixing delays in processing is more like teaching a new skill than getting strong by lifting weights. “How did you learn to ride a bike?” asks Dr. Wu. “The repetition of these exercises builds up that same kind of neuro-plasticity in the brain, making the connection stronger so the neurons get better at talking to each other.”

While every course of therapy is unique, successful patients seem to have one thing in common: an appetite for incredibly hard work. When Caroline, a high school athlete—who has requested that her last name not be used—was involved in a terrible car accident as a 17 year old, her double vision and slow processing speeds lingered for years. When she finally arrived at Berkeley Optometry, the optometrist who first examined her was honest about her odds. “She said ‘I don’t know what I can do for her, because your daughter is three years out,’” recalls Caroline’s mother Maryann. But Caroline was determined to persevere.

She traveled to Berkeley once a week for two years, doing exercises on her own every single day. “I felt like I was in school again,” recalls Caroline. And that’s by design. “There’s always homework,” says Dr. Lee. “We collect the homework, and we’re going to hold you accountable.” Caroline groans when she remembers days spent toiling with the beaded string. After a long stretch with minimal progress, her mother emailed the doctors to say she thought they might be doing the exercise wrong. The return email said “No, you’re doing it right. It’s just really, really hard.” So Caroline picked the string up and kept at it. “She cracked it open that third week,” Maryann says. “She was relentless.”

All that hard work carries the risk of boredom, so the clinicians and optometry students work to freshen the routine. “We’ll add time components,” says Dr. Wu. “Give patients scores that they can try to beat from week to week.” There’s also an attempt to “gamify” exercises, repurposing time-wasters like Tetris into legitimate therapies. Optometry students coach much of the on-site therapy and patients often cite those interactions as integral to keeping the process lively. Caroline, who has an athlete’s wicked sense of competitive humor, says, “I thought it was pretty cool. Every three weeks they changed the students and I got a new person to harass. Whenever I said I was sick of doing it one way, they would think of some new way to make me work.”

The odd dichotomy of vision impairment is that the sufferer deals with it every waking moment and yet appears to onlookers to be without deficit. Among the massive injuries and multi-system insufficiencies that often accompany TBIs and strokes, primary care physicians often overlook the profound effects visual disturbances have on a patient’s basic ability to function. But Berkeley’s Neuro- Optometry Clinic is bringing these problems—and their dramatic solutions—to a wider audience. Both Caroline and Gina give Berkeley Optometry much credit for helping them regain the lives they enjoyed before their accidents. Gina is now teaching yoga, expanding her life-coaching business, even hiking again. Caroline is driving, attending college out of state, and rowing crew.

“My career is pretty young,” says Dr. Wu. “But I barely did this kind of stuff as a student.” As more students come through Berkeley, the techniques they learn have begun to trickle out into the wider world, popping up in private practices and other academic settings. “I see patients doing things they haven’t been able to do in years,” says Dr. Wu. “They’re getting back into the workforce after coming through our clinic. Mrs. Moore has been coming here for almost three years and this past week she was able to go shopping by herself and find everything she needed. She even drove home from church with someone sitting by her side. It’s very satisfying.”

If you’d like to speak to someone in our neuro-optometry clinic, please call us at 510.642.2020 or send an email to: caleyecare@berkeley.edu.