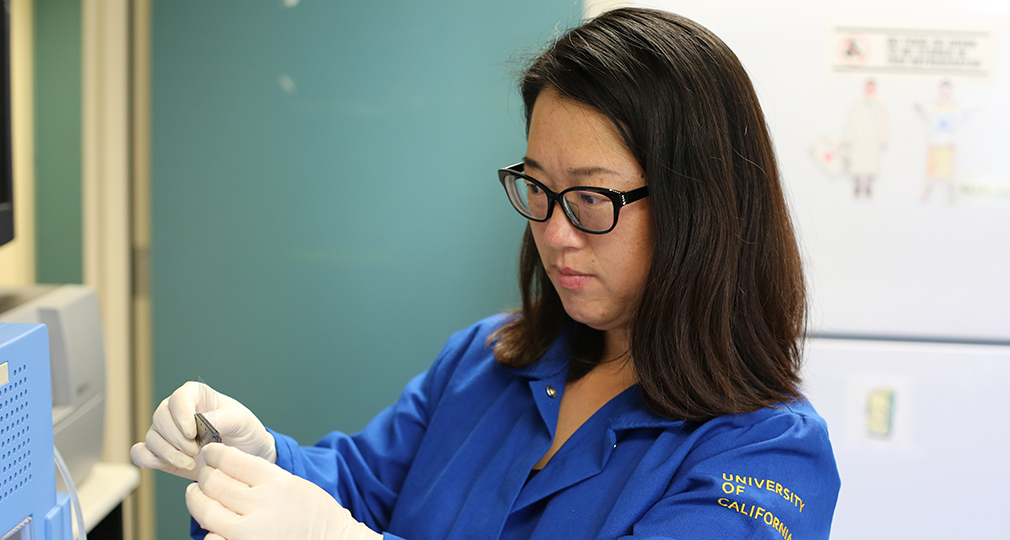 Yan Zhang, Eileen Phan and Christine F. Wildsoet of Berkeley Optometry’s Wildsoet lab’s recently published study in Scientific Reports piggy-backed on their earlier investigations into the role of the retinal pigment epithelium (RPE) in eye growth regulation and by extrapolation, myopia (near-sightedness), which has already reached epidemic levels in a number of East Asian countries.

Myopia is typically a product of excessive eye elongation, first appearing during childhood and reflecting a failure of ocular growth regulatory mechanisms that serve to shut down eye elongation when neonatal refractive errors have been corrected. If left unchecked the result can be high to very high myopia and potential blinding ocular complications. It is now well-established that these regulatory mechanisms reside within the eye, driven by the retina, the light-sensing layer of the eye, although much remains to be learnt about how the retina decodes incident images of the external environment to generate the growth modulating signals, and how these signals are relayed to the structural components making up the wall of the eye. Key to the study described in the Science Reports article are our previous observations that 3 members of the Bone Morphogenetic Protein (BMP) family of growth factors show bidirectional regulation in the RPE, at least at the gene expression level, being consistently down-regulated in the presence of visual stimuli known to enhance eye growth, as in myopia (form deprivation and negative lens-induced optical defocus), and up-regulated in the presence of positive lens-induced optical defocus, which is known to slow eye growth.

In the lab’s recent study, these results, i.e. BMP expression in the RPE, was turned into a tool, to learn more about how the retina decodes images of the outside world. In the case of optical focusing errors, it turns out that the retina needs very little time to detect induced changes to the retinal image, of the order of minutes, although longer – a few hours, to distinguish images falling in front to it from ones behind it (positive and negative lens examples resp.). This result in itself is somewhat surprising – that the retina is able to achieve what the human brain is not able to do – distinguish between these two types of optical defocus. That the early default response to altered retinal image quality, i.e. with very short exposure to optical defocus or form deprivation, was increased gene expression (and so presumably inhibited eye growth), is also interesting from an evolutionary perspective, as it suggests that young eyes are naturally protected against excessive eye elongation, from which recovery is difficult, if not impossible.

The study was led by clinician scientist, Dr Yan Zhang, and also involved UC Davis medical student, Eileen Phan, one of many undergraduate student researchers to have passed through our Myopia Research Group via UC Berkeley’s URAP.