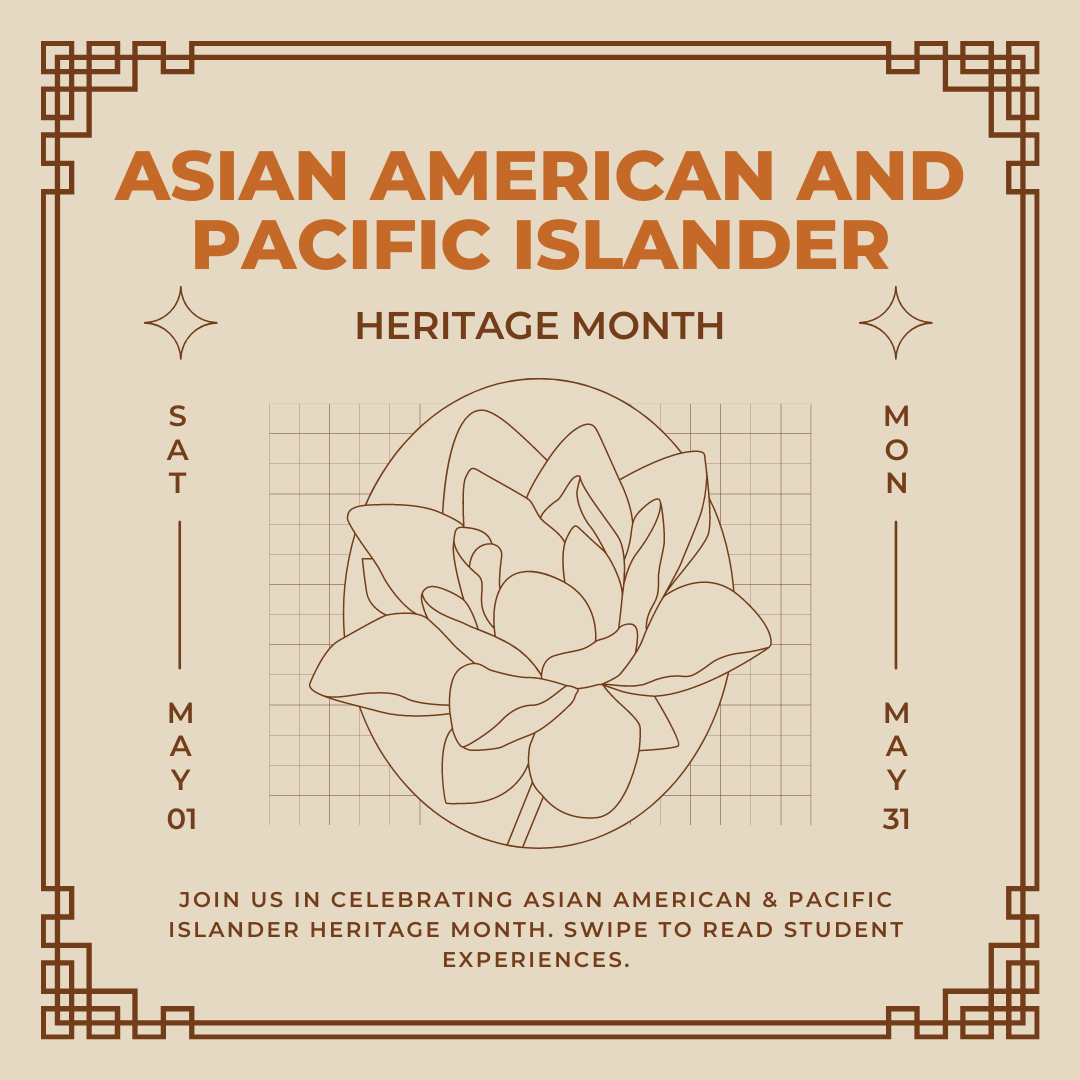 May was Asian American and Pacific Islander Heritage Month. In celebration, we wanted to share some thoughts from our students about what being a member of the AAPI community means to them. Read their experiences below.

Growing up, my parents always taught me the value of caring for others and working hard. My mom always said, “anyone can take away your belongings, but no one can take away your education”. I held these values close to my heart as I explored the world and pursued higher education. As the only person in my family to pursue a graduate program, I am proud to show the result of my parents’ hard work and sacrifices after moving to America from Thailand. My Thai heritage makes my life so colorful and full of so many loving people, incredible traditions, and mouthwatering food. My life experiences as an Asian American has allowed me to be open minded with my patients and empathize with those from all paths of life. Thank you mom and dad for my wonderfully multi-cultural life as a Thai American!

What does it mean to be Asian? As a second-generation Korean/Chinese-American, I experienced an ostensibly familiar narrative of parental pressure to become a “med school” doctor. Only when I became older did I grasp that this narrative, for many immigrants, derives from a burdensome relationship with money – or lack thereof. Thus, for my parents, the number of zeros in my income, understandably, served as their definition of success. Although I once identified with this definition, I realized the belief that money is everything can be toxic. Growing up middle-class, I recognize the privilege I had in choosing optometry not necessarily because it was the highest paying nor the most prestigious but, rather, because I enjoyed the nuances of this neat concept we call vision. Being Asian-American, for me, involves embracing an emphasis on work ethic and academics while also unlearning harmful familial mindsets and dispelling the model minority myth. The duality of my identity comes with unique challenges; yet, they are challenges that, nonetheless, I appreciate and take immense pride in tackling for molding me into a more understanding and open-minded optometrist.

I grew up on the island of Jamaica but my roots are Chinese. Although I am not American, I wanted to share my narrative as well. Growing up, I was so different from my peers, and many times I was frustrated with my family for being so strict and so harsh. I had immense pressure from my family to perform well academically. At times it even felt like my value was solely based on my performance.

Reflecting on the past, I now understand that their intentions were only to spare me from how hard they had to work to build their lives from scratch. While it has not been a smooth road, and there were many ups and downs, I am so proud of my Asian heritage and the values of perseverance and resilience that my family has instilled in me. I am incredibly grateful for the amount of sacrifice and hard work my parents have put in to give me the opportunity to be at UC Berkeley pursuing my dream to be a great optometrist and I only hope to continue making my family proud.

I am a first-generation Asian American who graduated from the Ivy League, so no one was surprised or impressed when I decided to become a doctor. People don’t realize that I felt very lost in choosing this career path, only landing on Optometry after several hundred hours of research, soul searching, and shadowing different professions.

I was born and raised in a state whose population is 94% Caucasian, and all my doctors growing up were white men, including my optometrist, and no one in my family had ever considered taking the MCAT or OAT – so it’s not entirely straightforward that I chose to become a doctor. I was grateful that UC Berkeley School of Optometry offered mentorship from professors who looked like me, whose stories related to my own upbringing, and who hunted for dim sum with the same enthusiasm.

During this AAPI and Jewish American Heritage Month, I realized I’ve never felt prouder to be an Asian American doctor. I hope to inspire my fellow doctors, patients, and community to continue authoring our own narratives and amplifying those of others.