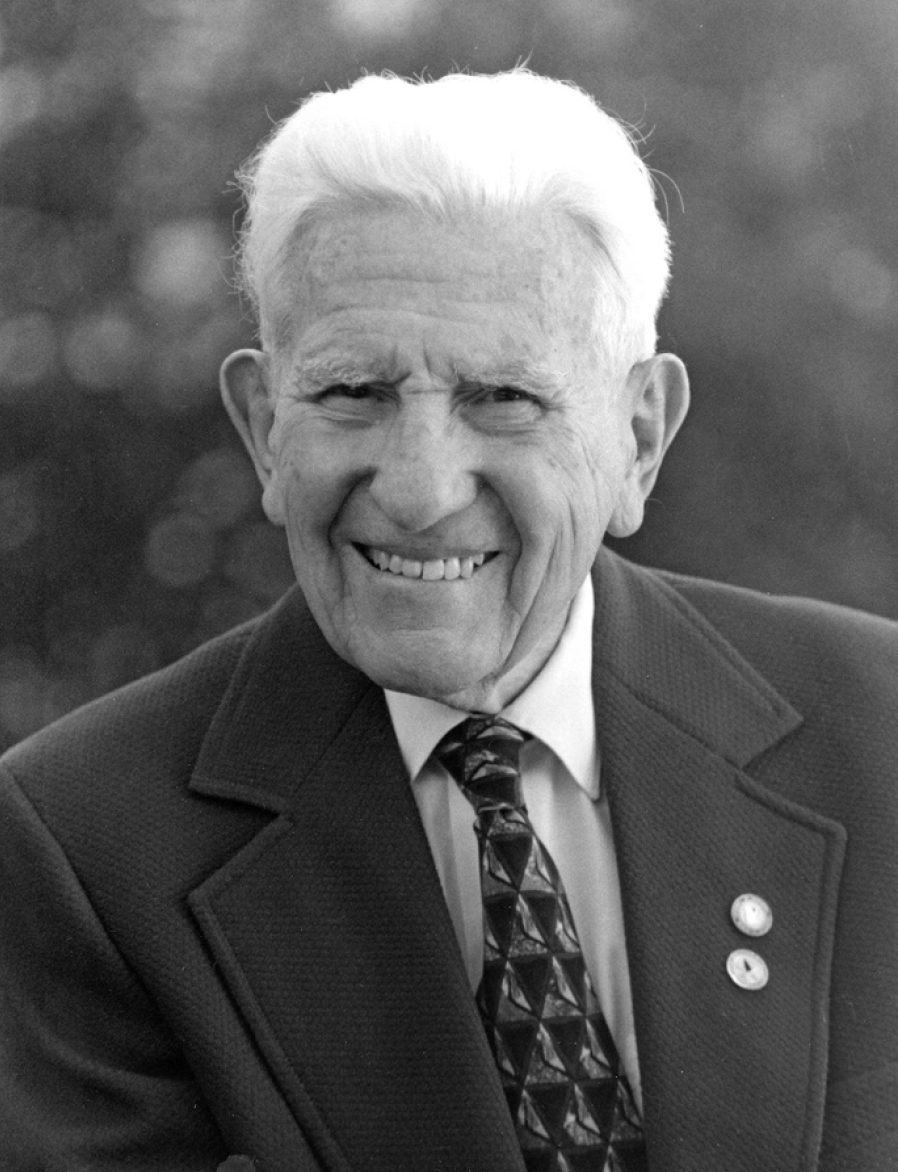 Dr. Edward Goodlaw (1913-2010) was born on January 4, 1913 in Denver, Colorado. He graduated from Berkeley Optometry in 1934 and earned his Doctor of Optical Science (DOS) degree from the Los Angeles College of Optometry in 1950. He has two optometric licenses, one from California and one from New York. He maintained a private practice in Los Angeles for 60 years before retiring.

Soon after graduation from Berkeley Optometry, Goodlaw acquired a biomicroscope that he used in his optometric practice. It played a role in an investigation leading to a seminal research paper titled “Contact lens solutions and their wearing time” (Optometric Weekly, 1946). He found that the temperature of the corneal epithelium increased when a contact lens was worn, thus requiring more oxygen for adequate function; at the same time, oxygen uptake was compromised by the use of materials impervious to oxygen. He concluded that the manufacturers of contact lenses should “endeavor to make their lenses of some semi-pervious material to allow for the oxygen-carbon dioxide exchange through it. Or, perhaps they should concentrate their efforts in designing the lenses in such a way as to allow continuous interchange of the lacrimal fluid between the lens and the eye.” It was a prescient and far-reaching conclusion, among other things helping to pave the way for the first corneal contact lenses made by Kevin Tuohy, a Los Angeles optician in practice with Berkeley Optometry alumnus Solon “Bud” Braff.

In other areas of research, Dr. Goodlaw developed the “bifocal half glass,” which gives an intermediate or near power. It is essentially a bifocal for emmetropic presbyope patients or presbyopic contact lens patients. He developed a number of tests in regard to near point testing. In low vision, he created a see-through mirror for patients with a hemianopsia. He published numerous articles in the fields of contact lenses, binocular vision, and low vision in journals of the American Optometric Association and the American Academy of Optometry.

Dr. Goodlaw’s teaching responsibilities included lecturing across the United States and Europe on the use of the slit lamp biomicroscope and contact lens fitting. In addition, he has lectured at AOA meetings in Minnesota, at associations in Hawaii, and at various meetings of the annual AAO conventions, including the Ellerbach Lecture Series and AAO Low Vision Section. He taught contact lenses, low vision, and binocular vision at the Southern California College of Optometry.

Ed Goodlaw has been a member of many organizations in optometry and in his community. He has served as President of the Los Angeles County Optometric Association, Chairman for many professional associations in Los Angeles County, chairman for the fund-raising community for the Minor Hall building capital campaign at Berkeley, and for 26 years Chief of Staff of the optometric section of Cedar Sinai Hospital (48 years total service).

Dr. Goodlaw’s many honors and awards include Alumnus of the Year from the Optometry Alumni Association of UC (1979); the Distinguished Service Award from the American Optometric Association (1983); the Feinbloom Award from the American Academy of Optometry (1983); Contact Lens Person of the Year from the California Optometric Association (1993); and listings in Who’s Who of the West and Who’s Who in America. For his contributions to the profession, the American Academy of Optometry awarded Goodlaw a rare “Triple Diplomat” in Contact Lenses, Low Vision, and Binocular Vision. Dr. Goodlaw died in 2010.