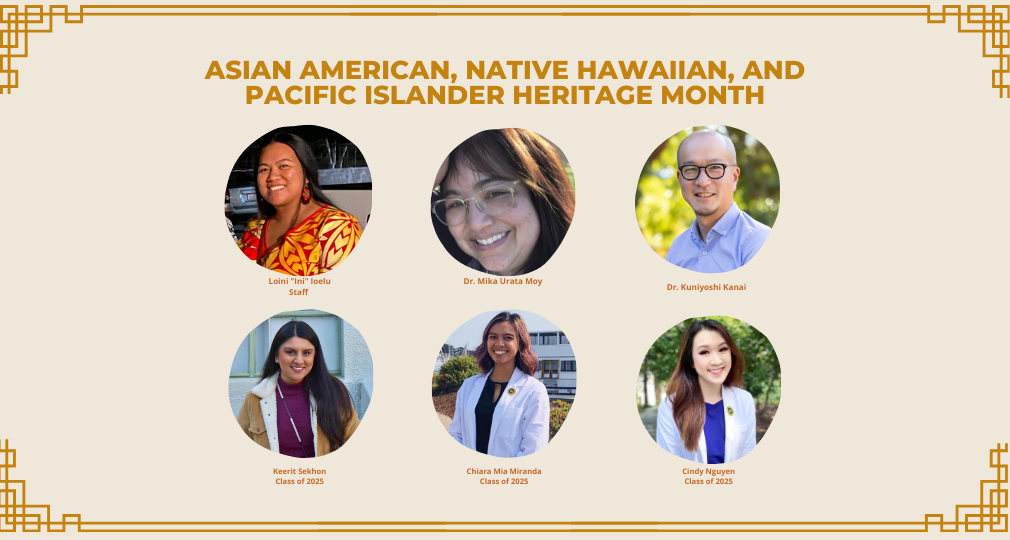 Asian American, Native Hawaiian, and Pacific Islander Heritage Month is observed annually in May to celebrate the contributions that generations of people who identify as AANHPI have made to American history, society, and culture in the United States. The term is very broad and is used to describe a diverse and fast-growing population of about 23 million Americans that includes about 50 ethnic groups with roots in more than 40 countries. In honor of this month, we are celebrating both students and faculty as they share with us their stories about their cultural heritage and stories/experiences growing up in America.

I am from the islands of American Samoa(Nu’uuli), Samoa(Saleimoa), and Manu’a(Faleasao and Ofu). Serving God first, family, and village is what makes being Samoan so special and important. Although this month is dedicated to us AAPI people, being with my family on the daily is how I celebrate AAPI. Speaking our language, eating our cultural foods, praying together as a family binds us as Samoans.

My first name means “beautiful fragrance” my last name means “Plum tree” my maiden name means “rice field by the ocean.” I was born and raised in Honolulu, Hawaii. It is not uncommon for someone in Hawaii to ask you about your ancestry because many people are multi-racial. I am half Japanese and half Caucasian–in Hawaii we refer to people like me as “Hapa” which is the Hawaiian word for half. My kids are four ethnicities: Japanese, Caucasian, Korean, and Chinese. Growing up, we all celebrated each other’s traditions whether it be Lunar New Year, Obon Festivals, Hula competitions, and of course–the best of each culture’s food and music.

To be honest, I have never celebrated AAPI month because growing up where I did, Asian and Pacific Islanders were in the majority and I guess we celebrated with each other all year long. One thing I have noticed change in Hawaii is the reverence for the Hawaiian language and culture has deepened. When Christian missionaries came to Hawaii in the 1800s, many traditions were frowned upon and threatened to be lost–like hula and the Hawaiian language itself. The Hawaiian monarchy was then illegally overthrown by American businessmen in 1893 and more of the culture was suppressed. Now, however, Hawaiian is offered as a foreign language in more high schools and more Hawaiian words are used in everyday language.

Another important thing to know: we reserve the word “Hawaiian” to refer to people who have native Hawaiian ancestry. If you ask me if I am Hawaiian knowing I grew up there, I would correct you and say that I am not Hawaiian but I am from Hawaii. That can confuse people, but we do it because being Native Hawaiian is a very special thing.

My grandma named me. “Kuniyoshi” means “good supporter” for my older brother whose name means “world king” :). As a Japanese native, I remember the month of May fondly. May 5th is “Children’s Day,” and we celebrate their lives and wish for their health and success in the future. We raise the flags of Japanese carp, “Koi,” hoping that they will live as strong and freely as Koi in the blue sky.

Keerit: “Who sings glories of God” or “Dedicated / Honest.” Being Asian American / Punjabi-Indian has played a huge role in me becoming an optometrist. I have only come across one Punjabi optometrist, which isn’t ideal when you’re living in the Bay Area, home to thousands of Punjabi families. I knew I always wanted to be part of the medical field, but specifically chose optometry not only because there is a vital link between the health of our eyes and systemic conditions, but also because I would like to bridge the gap between Punjabi-speaking patients and optometry through the utilization of my ability to communicate in the language. This will become especially important when working with elderly patients, who don’t have the resources to communicate in English and shy away from visiting the doctor.

I’m honored to have gotten the chance to fulfill my dream of becoming a Punjabi-speaking optometrist at UC Berkeley.

When I think about growing up as a Filipino American, the first word that comes to mind is “pamilya,” or family. Though my immediate family is rather small, I was always surrounded by numerous grandparents, aunties, uncles, and cousins that have supported me throughout the years. My family cares for one another, treats each other with kindness and respect, and is always there to lend a helping hand. I knew I wanted a career where I could treat others the way my family has treated me. In optometry, many doctors get the chance to form relationships with patients that they treat on a regular basis. I’d like to treat my future patients with that same kindness my family has toward each other, and make sure they feel supported and their concerns are heard. As a future optometrist, I hope to make my patients feel like they are treated like family.

My favorite part of my Filipino culture is the food! I always look forward to big family parties and eating “kare kare” (creamy peanut stew with oxtail and vegetables) and “sisig” (crispy chopped pork) while hanging out with all of my cousins. I encourage everyone to try out Filipino food if you get the chance!

As a first-generation OD student, I owe much of who I am today to my parents, who immigrated from Vietnam in the 1980’s. My biggest inspiration is my father, who came to the U.S. at the age of 35 with no money and a family to support, and who knew his only way out was up and through. “There was no alternative,” he always said, for he simply could not fail, knowing he had to conquer the challenges of providing for his family in a country where he did not even speak the language. His efforts led him to graduate from UC Berkeley with a degree in EECS, followed by years of progressive achievements. Throughout, my mother took on various roles to support our family, until she, too, found solid footing in her music education career. My parents’ drive to succeed despite all odds served as the main force for their success, and they continually inspire me to pursue my own goals with the same drive and dedication.

I am extremely fortunate to be where I am today, pursuing my dream career at one of the best institutions in the world, alongside some of the most brilliant peers, mentors, and faculty I have ever met. I count every blessing, because none of it would even be possible without the combined hard work and support of my mother and my father.

Family values are important in building a solid foundation and home base — my family loves spending nights together playing games, trying new restaurants, and being in one another’s company. The simplest things can make such a huge difference, and it’s important to find opportunities to learn and grow from one another, whether that be with your parents, siblings, or friends!